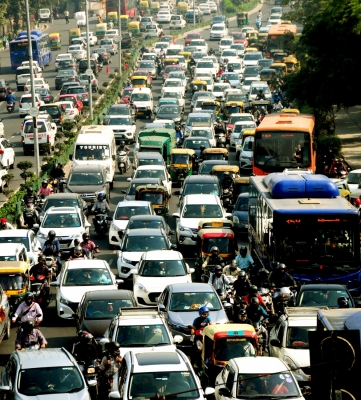 New Delhi, Dec 5 (IANS) After the Sub-Committee for operationalisation of the revised GRAP (Graded Response Action Plan) on Sunday reviewed all the actions as envisaged under Stage-III of the GRAP in Delhi and NCR, the transport department of Delhi govt has restricted the entry of BS-III petrol and BS-IV diesel LMVs (4 wheelers) in Delhi, with immediate effect.

The restrictions on the vehicle will continue till December 9 or downward the revision in GRAP stage whichever is earlier.

“As per the directions under GRAP-3, Transport Dept of Delhi Govt orders restrictions to ply BS-3 Petrol and BS-4 Diesel LMVs (4 wheelers) in NCT of Delhi, with immediate effect, till dated 9th December or till downward revision in GRAP stage, whichever is earlier,” said the transport department in a official communication.

However, the restriction will not be imposed on the vehicles deployed in emergency services, government and election work.

“If any BS-III petrol and BS-IV diesel LMV (4 wheeler) found plying on the roads, will be prosecuted under section 194 of Motor Vehicle Act, 1988 which provides with a fine of Rs 20,000,” the transport department said.

EU unveils green industry deal to compete with US