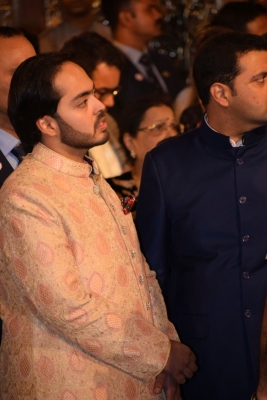 Bhubaneswar, Jan 24 (IANS) Business tycoon Mukesh Ambani’s younger son Anant Ambani on Tuesday visited the Jagannath temple in Puri and sought blessings before his marriage. This is his first visit to Puri after getting engaged to Radhika Merchant.

Junior Ambani expressed happiness after having darshan of the holy trinity at the temple.

“I am happy that I had a very good darshan of Lord Jagannath. I pray for his blessings,” he told the media outside the temple.

He remained inside the main temple for around 10 minutes and offered prayers to the trinity, before visiting Maa Bimala, Maa Laxmi and Mahavir temples, said a servitor.

Earlier, Anant arrived in Bhubaneswar from where he drove straight to Puri. Security arrangements were tightened for his visit to the Puri temple.

The Ambani scion had also visited Kamakhya Temple in Guwahati on Monday and sought the blessings of the Goddess.

On January 19, Anant got engaged to Radhika Merchant, daughter of Shaila and Viren Merchant, at the Ambani residence Antilia in Mumbai.