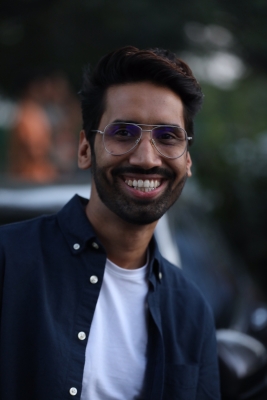 New Delhi, Dec 5 (IANS) Actor and host Abhilash Thapliyal will be seen in Ashwiny Iyer Tiwari’s upcoming series ‘Faadu’. He talked about playing Roxy in the web series and how he became unrecognisable for others with his look.

He said: “Roxy looks very different from what I look like in my real life and I think that is why a lot of friends could not recognise me. For an actor, it is a huge compliment when people who know us are not able to recognise you. We wanted to be very precise with how Roxy looks. He is a drunkard, he lives in the slums, he does not take care of himself, he is very shabby, Also, he is out in the sun most of the time so the tan has to be perfect.”

Abhilash recently shot to fame with the web show ‘Aspirants’. The actor has been shooting in slums in and around Mumbai and his character needed to look very poor and shabby.

“We wanted the shabbiness to come out and I think Ashwiny Iyer Tiwari ma’am, because she saw the character was able to crack. A very interesting thing happened the very first day that I was dressed as Roxy and I was stopped at the shoot, the production guys and the crew stopped me. They thought that some drunkard had entered the set. That was the very first day I realised that we have cracked Roxy. If people who you are working with can’t recognise you, then it is a big victory for an actor,” he added.

He has previously done films like ‘Dil Juunglee’ starring Saqib Saleem and Taapsee Pannu and shows like ‘Entertainment Ki Raat’ and ‘Comedy Circus’.

On the question of how he prepared for the character and how challenging it was, he replied: “It was not just about the face I think. Roxy is an alcoholic and I don’t drink at all in my real life, so I had to get into the psyche of how he walks, talks, how he looks at people and his perception of life.”

“Also, the make would take a lot of time. An hour to get into the look and an hour to get out of it. The whole body had to be tanned so the entire body would be under make up. So that was an extensive regimen. But after how people have reacted to the look it was all worth it,” he concluded.