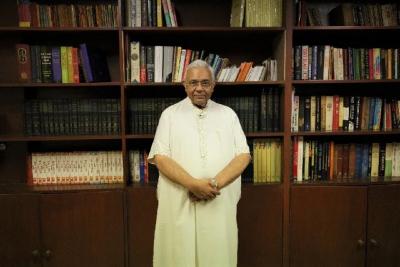 By Rahul Kumar
New Delhi, June 9: One of India’s oldest Urdu newspapers, The Daily Milap has an interesting history that spans three countries — India, Pakistan and even the UK. The newspaper and its owner-editors also share an intricate weave and weft with that of the growth of the country and the evolution of Indian society. Interestingly and perplexingly, the change is not much reflected in the readership of the Urdu press, which still remains anchored to the days of yore.

India Narrative catches up with Navin Suri, Chief Editor of The Daily Milap at his office on the Bahadur Shah Zafar Marg, often called India’s Fleet Street. The newspaper has entered its 100th year, which is an achievement in tech-driven times where established publications, and even late entrants, have been falling like ninepins.

With more than four decades behind him as editor, Suri talks at length about the fading sheen of the Urdu media, challenges from the ever-evolving technology and Milap’s journey through the decades.

Excerpts from the interview:

Q: How is this long journey of Milap interwoven with that of India?

Suri: Milap has been intricately involved with the freedom struggle of the country. My father and my five uncles were all involved in the freedom movement.

My uncle Ranbir Singh was a close confidant of Bhagat Singh. After the bombing, Bhagat Singh was arrested along with his comrades. They were put in solitary confinement and the British were trying to extract information from them unsuccessfully. They devised a plan and told Bhagat Singh that his other comrades had turned approvers, which was not true.

At that time, relatives were allowed to meet the prisoners once a week under a watchful eye.

During that meeting Bhagat Singh’s father told him, ‘jalebi sut dein, lekin akhbar deikh lein’, (throw the jalebis but do read the newspaper) which confused Bhagat Singh further. However, he did what he was told and he read the newspaper carefully. He eventually understood that his comrades had not buckled under British pressure.

Suri: In another case — the Hindi Aandolan, Master Tara Singh was fighting for a Punjabi Subba and wanted the Sikhs and Hindus alike to mention that their mother tongue was Punjabi. Hindu organisations also stood up to say that Hindi was the mother tongue for both the communities.

It must have been around 1960-1961 and both sides went to Nehru to present their case. In their presentation, Master Tara Singh and Sant Fateh Singh showed Nehru clippings of Milap to say that Punjabi should be made the mother tongue.

In their presentation, the Hindu Mahasabha and the Arya Samaj too showed Milap cuttings to Nehru and stressed that Hindi should be made the mother tongue. Nehru was amused and told both the parties, ‘aap Punjabi ke liye lad rahe hain, aur aap Hindi ke liye lad rahe hain, lekin akhbar Urdu ka dikha rahe hain. (You are fighting for Punjabi and you are fighting for Hindi, but both of you bring newspapers in Urdu).

Q: What are the changes that you have seen in Indian society over this long period?

Suri: There is more acceptability of societal issues among people. For example, divorce does not have the same taboo that we once had. Earlier so much was vested in a marriage through culture and society. Now divorce has been accepted by women as well as ‘respectable families’.

I also see tolerance grow in religion and faith and in forging and un-forging of friendships. Earlier if someone said something about religion or a guru, people would be thrown out of the village and ‘hukka pani band ho jata tha’ (people would be ostracised from the community). It is no longer the case.

Q: How is the Urdu news reader different from that of the English or the Hindi news reader?

Suri: It is a tricky question. The Urdu reader is personally involved in his newspaper and so is the editor. I still write the editorials under my name, wherein I address the readers as ‘main aur tum’ (I and you).

Our readers write letters to us as if they know me personally. An Urdu reader may not know me but I will get invited for his family occasions like marriages and even bereavement in his family.

On other occasions, I will get a letter from a father, asking me speak with his 19-year-old daughter who wants to study. The father wants me to persuade his daughter to get married because that is the tradition in the family.

The Urdu editor and the reader have a personal equation, which does not exist in any other language. I am a family member of my reader.

Q: So what are the Urdu readers reading?

Suri: Ever since the Urdu newspapers began publishing from Bengal and from Lahore, they have covered life and society, not just politics. Now politics has been steadily increasing but other aspects of our society continue to be published.

We publish more positive news than about politics or religion. We will still take news about a particular type of kahwa preparation or knitting from Kashmir. Our focus continues to remain on our readers and the society. Readers still like to remain involved personally in the Urdu newspaper.

In earlier days, page one would have politics on one day, religion on the second day, maybe a scandal on the third day and would publish people’s letters and society-related news on another day—all on page one.

We would carry information on knitting because our readers liked to see that in the paper, but that disappeared now. There was a time when we would even carry the complaints of a housewife against her husband.

The subscription for our newspaper is still called ‘chanda’ (donation) instead of subscription. Hum toh chande pe jee rahe hain (We are literally surviving on donations).

The wall in Navin Suri’s office is adorned with swords presented by gurdwaras, a kalma from the Koran that showers blessings and miniature murtis of gods and goddesses

Q: How has Milap kept pace with changes in the media industry?

Suri: We are making a lot of effort but not all of that has met with success.

Urdu no longer enjoys the same glory that it once had but there is no point in hollering about it either. We have to accept that the Urdu media is struggling.

It was in 1983 that we first began computerising Milap. We were looking to Pakistan for help and reached out to the largest Urdu newspaper — Nawai Waqt. However, things did not progress much. Finally a Hyderabad-based company helped us develop Urdu software. Since then we have been ahead in the technology race among the Urdu media in India.

Once during the late sixties, we even started publishing from London. The Milap London newspaper was bilingual-printed in Urdu and English. This was in response to the launch of a Pakistani newspaper in London. We lasted about three to four years only.

Q: Every media house is struggling with the online medium. How is Milap coping?

Suri: We are branching out as much as we can. Besides the website, we have a Milap app.

We launched the Milap News Service which provides exclusive Milap articles to the Urdu media. In about nine months we have a subscription base of 86 newspapers for our news service.

We are also providing information to the diplomatic core. The embassies of various countries mainly want to know how their policies are being perceived among our readers. The embassies and diplomats find us dependable and credible in the information that we provide to them.

Q: Another challenge before the mainstream media is the proliferation of fake news and misleading information on social media platforms. However, the responsibility to debunk wrong information often falls on mainstream journalists. How is the Urdu media coping up on this front?

Suri: Well, the Urdu social media too has a lot of fake news. Sometimes it turns out to be very embarrassing for us because people may try to project fake information through us. We nip it in the bud. We try to hit back hard against fake information.

It is very difficult to cure it. ‘Har aadmi apne aap ko khuda samajhta hai’ (Everyone on social media thinks he is god). These are the positives and negatives of technology.

Q: Do you have readership in Pakistan?

Suri: We have no statistics on readers in Pakistan, though we do have Twitter followers there. Milap and Pakistan do have an interesting relationship.

We had been critical of Imran Khan as the prime minister. Finally, one day we noticed that he blocked both of our accounts on Facebook and Twitter. We felt very flattered by this.

Then during the 1971 war, relations between India and Pakistan were at a nadir. One day someone came to us and said that they had caught packets of Milap on the border. Then we came to know that 2,000 copies of our newspaper were being smuggled to Pakistan from the Punjab border every day. So, I guess we have some readers there.

(The content is being carried under an arrangement with indianarrative.com)