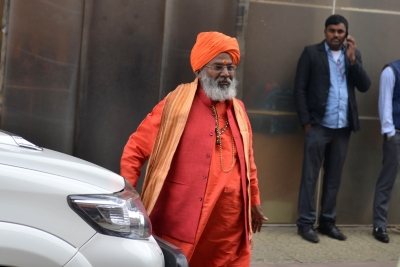 Unnao (Uttar Pradesh), June 16 (IANS) BJP MP Sakshi Maharaj has said that under the leadership of Prime Minister Narendra Modi in the country and Chief Minister Yogi Adityanath in Uttar Pradesh, a new page is being added in the history.

He said, “For the first time, it seems, that India is India. History is being rewritten.”

Sakshi Maharaj’s statement gives “credence” to the Opposition charge that the BJP governments were rewriting history.

“What is wrong if we are correcting something that was not right?” he asked.

The BJP MP, said late on Wednesday night, that the Left has influenced the history of India.

“People have been misled from the truth. Those who had a government for 75 years did a great betrayal of history. Now the record of 500 years is being broken. Somewhere, the record of 75 years is being broken. Under the leadership of Yogi in Uttar Pradesh and under the leadership of Modi in the country, a new page is added in the history. For the first time it seems that India is now India,” he stated.

A day earlier, Sakshi Maharaj had said that the stone pelting in Kanpur and other districts was an attempt to set Kanpur on fire in a planned manner.

He said that if stones are pelted on Friday in Uttar Pradesh, then the bulldozer will definitely run on Saturday.

Sakshi Maharaj added that in these eight years, Prime Minister Modi has done so much development that all the political parties are not able to stand anywhere in the race.