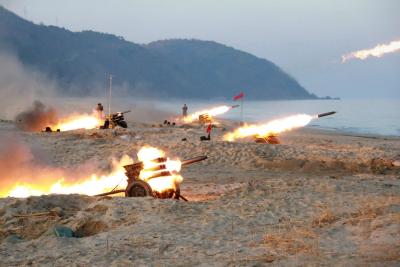 Seoul, Dec 6 (IANS) North Korea’s military said on Tuesday that it has ordered artillery firing into the sea in response to live-fire drills between South Korea and the US near the inter-Korean border.

The General Staff of the Korean People’s Army (KPA) said it detected the South Korean military’s firing of artillery from multiple rocket launchers and howitzers in frontline areas from around 9.15 a.m. following similar military actions on Monday, according to a statement carried by Pyongyang’s official Korean Central News Agency (KCNA).

“We immediately ordered frontline artillery units to launch artillery firing into the sea to issue a strong warning,” Yonhap News Agency quoted a KPA General Staff spokesperson as saying in the KCNA statement.

The official called on the South to immediately stop “provocative” military actions.

The North appears to be referring to live-fire drills being conducted between South Korea and the US at border units in Cheorwon County, 71 km northeast of Seoul.

The warning shots came a day after North Korea fired some 130 artillery shells into eastern and western maritime “buffer zones” to protest the allies’ live-fire exercise.